Welcome to RKC Contractors. Founded by Managing Director Ross King, RKC is a well-established CHAS accredited company providing both the commercial and domestic sector with Civil Engineering, Groundworks, Security Fencing and Landscaping services. Our reputation is built on excellence and quality. With this in mind, we are committed to working with our valued clients to advise and provide innovative ideas and advice on achieving long-lasting solutions. 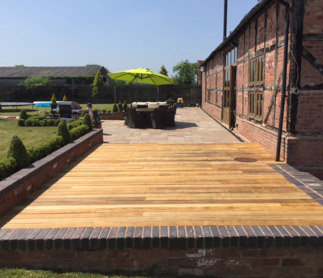 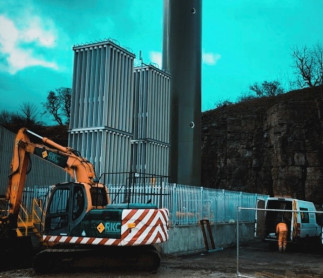 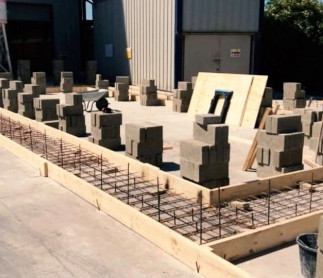 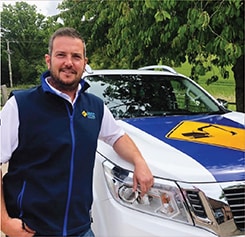 Ross started the company in 2003 following a successful farming career and is now highly respected within the industry as an expert in Civil Engineering and Groundworks. Ross has high regard for his team and takes pride in offering his clients the highest level of quality workmanship. 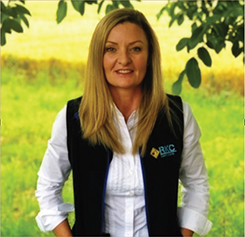 Sarah joined the team in 2015 with diverse experience in account management and business. Based at our offices just outside Henley in Arden Sarah manages all RKC's administrative matters to include finance & accounts, sales & marketing, health & safety, compliance and accreditations. 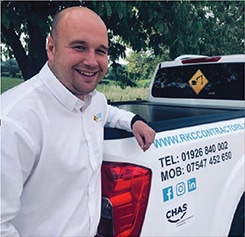 Tom joined the team in 2018 following a successful career running his own company specialising in groundworks and landscaping. Tom is responsible for customer enquiries and quotes, purchasing, and the management of contracted works. Thus ensuring that every project is managed in line with the companies ethos of quality providing total customer satisfaction and peace of mind. 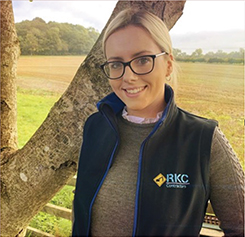 Beck joined the team in June 2020 with an abundance of experience within the public sector. Beck is based beside Sarah and is responsible for the marketing and sales development of RKC. With the vision of actively evolving the companies on-line profile using the very latest in marketing software, Beck's initiative is to ensure a good level of business growth whilst maintaining RKC's high standard of quality.

See the teams 'Out-takes' photos below.

WHAT THE TEAM SAY

“We love landscaping! There are endless possibilities to transform outdoor spaces and extremely versatile materials
on the market to give you almost any effect you desire.”

“Whether it’s a pot-hole or a complete car park we can offer concrete and tarmac works at
realistic prices for all budgets.”

One of our interesting jobs today for Perfect Ponds & Coldwater Aquatics.
We provided the client with a full lifting plan and RAMS. We then lifted out the fountain in two stages.

The fountain has now been stored safely until we have brought up the levels of the pond.
Once compacted Paul, Dave and their team at Perfect Ponds will complete the re lining of the pond.
We will then return to install the fountain back in its original position. ⛲️ ...

Fantastic day seeing you all at Shelfield Park Races. What a brilliant first P2P and we are so thrilled to be head sponsors of this great event!
See you all next time! 🐎🥳 ...

A natural stone patio project coming along nicely in Wooten Wawen. Well done to our team on this one it’s Stunning. 👌 #RKC #landscaping ...

🐎 We are proud to announce we are the Main Sponsors for the Shelfield Park Races Point to Point on Saturday 19th March for the second Year running. 🐎

Go over to their page and click follow to get all the information regarding Tickets for this fantastic day out! #RKC #pointtopoint #racing #sponsors #construction #groundworks

Merry Christmas From The Team At RKC Contractors Ltd.

We would like to thank all of our Customers, Staff and Suppliers that have supported us this year and look forward to seeing you all in the New Year! 🎅🏻 ...

Swipe to see the quality transformation at a commercial shopping centre located in the midlands.

Works included a new entrance to a customer car park where RKC broke out an existing concrete wall, installed a new drop kerb entrance with a freshly laid tarmac finish.

We also plained out a failed tarmac car park entrance and reinstated with new tarmac leaving a quality finish and ensuring all works and waste were removed overnight allowing business as usual the next day.

A client was in need of a fresh pathway surrounding her pool so RKC came up trumps again by removing the existing tired and failed surface, replacing it with new golden resin! 💛

What a difference it has made to this beautiful swimming pool by adding a touch of style! 🏊🏻‍♀️⛱☀️

To see how RKC can help transform your outdoor space please contact us on 01926840002 or email at hello@rkccontractors.co.uk for a free no obligation quote today.

A smart and efficient tidy up at a commercial property last week clearing the area of weeds, removing waste and supplying new topsoil before laying premium @rolawn turf. 🌱🌿

What a difference it’s made 🌱🌿

Call now on 01926 840002 if you would like to transform your outdoor spaces. Likewise visit our website at www.rkccontractors.co.uk for more ideas on materials and ways in which you can add touch of style to your property’s look. 🌱🌿

In the absence of a company hot tub, Oli is constantly proving resourceful!! 💦🧊

Now all he needs is a cold beer 🍻

We know what we would prefer 🤣

Shout out to all the RKC lads working in this heat! For any queries you may have please get in contact on 01926 840002 for a free no obligation quote.

Now you see it, now you don’t.

A 140ton of gravel and 80ton of concrete removed quickly and efficiently for a retained client leaving a clean quality finished clearance job.

Get in touch today for site clearance on 01926 840002 or email us at hello@rkccontractors.co.uk

Commercial Maintenance undertaken for a customer at a garage forecourt including 5 gulley’s unblocked and cleared out, dish channels lifted and reset and fresh tarmac patch repairs.

Are you In need of some general maintenance repairs call RKC today on 01926 840002 for a free no obligation quote.

We fitted Armco protection barriers to avoid any damage from vehicles on a very busy metal recycling site along with 120lm of palisade security fencing.

We broke out existing concrete and dug trenches around the site to lay ducts needed for cat5 cctv as well as mains cable for new led security lighting and cctv systems. Once the clients electricians completed their works we reinstated with c40 steel reinforced concrete.

If you have any security fencing or Commercial Civil works coming up and you need a trusted accredited contractor RKC are here to help you.
Talk to our Projects Manager Tom now on 01926 840002 or 07547452650 to discuss your requirements.

A Demolition project removing a building for a returning customer in Alcester Industrial Estate carried out this week. With big machinery and cranes the client required an outdoor working area to increase operations at this site. On completion of the demolition, we then removed the hardcore from site and recycled it using @jawscrusherhire turning the waste product into useable crushed hardcore.

What a great day Sunday was with the opening of @shelfieldparkraces Point-to-point, where we were proud to have worked on the completion of the course. It was a pleasure to be the headline sponsor at the first of what we know will be many successful future events. 🏇

Any landscaping enquires to transform your gardens ready for the summer contact us now on 01926840002 for a free no obligation quote.

A quick and quality tarmac drive installed with block paved boarder completed for a customer in Redditch to add the finishing touches on there newly renovated house.

With summer fast approaching it’s time to transform your outdoor spaces ☀️ ☀️ ☀️ from patios to driveways RKC is here to help.

We lifted the existing tired patio and installed a new Indian sand stone patio with a reclaimed brick edge surrounding the outside. We have rejuvenated the drive by scraping off the old surface, compacting and levelling through the sub base and then finishing with over 40ton of 20mm costwold shingle.

Call now on 01926840002 for any quality groundwork’s and landscaping enquires. Here to help.

Finishing touches today for the point to point groundwork’s at the new Shelfield park racecourse @shelfieldparkraces.
🐎 🐎 🐎

Beautiful new resin drive completed today for a client in Warwickshire☀️. Very pleased with the outcome after battling with bad weather the last couple of weeks. The sunshine was an absolute delight to us so we could get the rendering complete and the resin down today.

Quality finish by the RKC team👷🏽‍♂️


Error: API requests are being delayed for this account. New posts will not be retrieved.

• Civil Engineering - Working with national companies, we undertake all manner of Civil Engineering works with reinforced concrete and tarmac with a fully qualified team who work efficiently and with remarkable skill.

• Groundworks - We provide all types of groundworks for commercial and domestic clients, including excavating, industrial concreting, septic tank replacement and more.

• Landscaping - Our team are skilled in all aspects of landscaping, on both domestic and commercial projects as well as working with reclaimed materials for use on listed properties.

Serving the West Midlands areas with pride for many years… 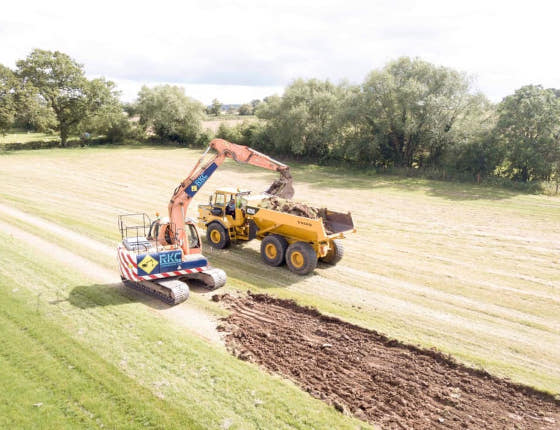 To keep the impact on the environment to a minimum, our focus is providing the best and most cost-effective methods of work at realistic prices. Our team of qualified and skilled ground workers with an extensive fleet of plant and machinery allows us to guarantee efficiency and quality throughout your project. Your Project Manager will provide you with total peace of mind that your journey with RKC will give you a value for money service and a finish to be proud of.

WHAT OUR CLIENTS SAY

“RKC Contractors are a fantastic professional company. I have used them on several projects recently and they are first class! They are extremely knowledgeable and I would highly recommend their services.”

“I’ve been blown away by the professionalism, hard work and attention to detail that RKC Contractors have delivered. Without going into too much detail, I had a collapsed septic tank which another contractor was bidding for, however after being let down by them I was recommended RKC. The first thing they did was organise a portaloo- sounds basic, but without any sewage waste disposal they thought of the basics. It took the team just three days to install the new tank – which involved big digger toys, cement lorry and waste disposal… it was run with clock work precision. RKC were methodical in tidying up the grounds work afterwards too.
Thank you to the team at RKC!

“Domestic drainage job with a couple of complications – great service from RKC and subsequent follow up – would without
hesitation recommend to anyone considering their services. 5 star service and company.”

- Charlie Spicer
GET A QUOTE

Please fill out the form below and will be in touch.